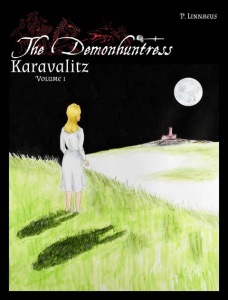 Editors Canada member Dr. Paul Ling certainly has taken the road less travelled. After a successful career in medicine as a surgeon and clinical professor, Dr. Ling detoured into health science editing, and then following his passion for nineteenth-century gothic adventures, took a turn into the world of art and literature. Karavalitz, the first volume of his graphic novel series, The Demonhuntress, has just debuted. The book, published under the nom de plume Paulus Linnaeus, introduces readers to Alexis, a young woman who must untangle the secret of her own existence while also solving the mysterious death of her husband.

We interviewed Dr. Ling about his experience transitioning from editing to creating a graphic novel.

You first conceived of this project when you were in high school. What made you finally take the plunge and write it?

Last year I was consolidating my schedule and had been working on a separate cartoon series of traditional daily funnies—they’re much easier and quicker to execute—but my real passion always was to produce a dramatic graphic novel. So I took a long look at my priorities and realized I could no longer suppress the need to complete at least one serious graphic novel before I died. I’m now working on the second one.

What are your thoughts on how words and pictures work together to tell a story?

The pacing and structure are completely different from pure words, to which we are accustomed as editors. Sequential art, which is what many graphic novelists call their work, is truly like the work of a film director. One must consider the visual impact, camera angles, character development and interaction from a physical perspective that is effectively moving through time. It’s harder than one might think, but is thoroughly engaging work. [Editor’s Note: To learn more about editing comics, see the BoldFace article “Recap of Editing Comics: From Concept to Publication.”]

As a youth I voraciously read the classic adventure stories, both traditional prose as well as the French bandes dessinées, which are akin to cinema more than typical North American comics. I would also research the related historical contexts to discern what was genuine and accurate in the authors’ work. Having lived in many countries and among many cultures also has helped to shape my own artistic directions with regard to the way my characters behave and interact with one another.

Can you describe your transition from editing to writing a graphic novel?

I guess it doesn’t feel so much like a transition because the two processes, for me, were completely disconnected—at least until I hired an editor to look over my work. In fact, since writing and drawing a graphic novel was in my consciousness before I ever became an editor, perhaps a putative transition might have been in the opposite sense? Perhaps I could say that I continually edit my work as I create.

How is the process of editing comics different from editing regular text? Tell us what it was like to be edited as an editor.

Because the cues are so different from strict written syntax, finding an editor who isn’t bound by traditional strictures turned out to be more challenging than I had anticipated. There are so many levels at which one might be called to edit a graphic novel, because the storytelling transcends written words. I found it best to be very clear about the scope of the job; in the case of The Demonhuntress, all I wanted was an editor to check the dialogue for flow—that is, to check for continuity errors, lack of clarity, that sort of thing—much like a light copy edit. Some editors may be suited to a more structural analysis, involving critiques of the visual art itself, 3-D perspective, pacing of various scenes, where to place page breaks for suspense, and so on.

It’s vital to note that an editor who’s accustomed to text-only novels isn’t necessarily bringing a suitable eye to editing a graphic novel, even though the formats seem closely related. Writers are better off finding someone, as I did, who has had training in film, since a graphic novel is exactly like a movie storyboard. In fact, even without the words and speech bubbles, an intuitive and alert reader can ascertain the storyline quite accurately if the graphic novel images are designed shrewdly.

Indu Singh is a Toronto-based writer and editor. She is the vice-chair of Editors Toronto.