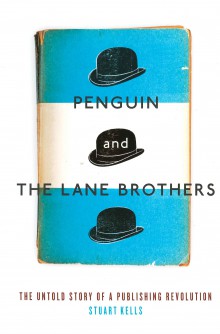 Penguin Books has been an international literary treasure—a cultural institution that remains a stronghold in the publishing market—since its inception in the 1930s. The 2013 merger with Random House further cemented its omnipresence in the literary scene. However, despite its decades-long prominence, accounts of Penguin’s history have been incomplete and erroneous. Stuart Kells seeks to set history straight in this meticulously researched, unbiased biography of the publishing behemoth and its founders.

When Kells wrote this book, Wikipedia listed Allen Lane as the sole founder of Penguin Books. In fact, all previous biographies of Penguin focus on Allen, whom the public hailed a publishing genius. So how did a man whose favourite book was The Culture of the Abdomen: The Cure of Obesity and Constipation establish a publishing empire? The answer is he didn’t.

Kells unearthed a vast array of sources to reveal that the lesser-known Lane brothers, Richard and John (who were co-founders with Allen and held equal ownership), were not only instrumental in the hatching of Penguin but also the wings that made this flightless bird soar. Richard in particular was the ongoing driving force, as John was killed during World War II. Richard rightfully takes centre stage in this story; this book might as well have been subtitled The Untold Story of Richard Lane. He was the true “architect” of Penguin.

Penguin ignited a literary renaissance, altering the structure of the publishing industry itself. Before Penguin, books were either expensive, high-quality artifacts occasionally dripping with decadence or cheap, low-quality commodities with limited titles. Penguin foresaw the opportunity for a new business model wherein literature could be made available to the general populace without compromising on the quality of content or style. The public’s embrace of Penguin was unprecedented, as is exemplified in this newspaper quote: “Slowly the best of modern literature will be coming into the hands of any man who wants it, and in the process man himself is going to be changed.”

To understand the keys to its success, we must first understand the key players: Allen, a notorious playboy who was not unlike a weapon of mass destruction (at one point he actually destroyed a stock of books); Richard, the scrupulous book lover who constantly had to defuse the bombs his older brother recklessly assembled; and John, the youngest sibling, whose personality remains a bit of a mystery due to his short life.

If we cannot attribute Penguin’s success to Allen, a man who conveniently escaped to weight-loss retreats when faced with hard work, why did Richard and John become the brothers that time had forgotten? Simply because the megalomaniacal Allen went to great lengths to undermine the reputation of his siblings in order to crown himself King Penguin. He obfuscated history by sweeping his brothers under the rug. After a lifetime of ruthless scheming, he admitted, “I’m not a very intelligent man, and I’ve really got away with murder.”

Would it be accurate to say that as a collective unit the Lane brothers were ingenious innovators? The author says, “Each of the brothers was a formidable talent in his own right.” Wrong. It was obvious to staff members that “Allen was a man who didn’t think of ideas himself.” However, if being duplicitous and conniving are remarkable traits, then he had those in spades. And although Richard and John were hard-working and competent, they never demonstrated a proclivity for “greatness.”

Nepotism also factors in. When John Lane Sr., your distant uncle, is literary royalty (specifically, the owner of The Bodley Head, publisher of authors such as Oscar Wilde), it unleashes a world of opportunity. All three brothers worked at The Bodley Head after their uncle’s death; before it became its own entity, Penguin Books started out as an imprint of The Bodley Head.

The Lanes were indeed responsible for a publishing revolution, but they clearly weren’t revolutionaries themselves. They were, however, very receptive to other people’s ideas—so receptive that they appropriated them. The brothers imitated Albatross, another publishing house, to an alarming degree: they copied its sans serif typographical covers, its colour-coded system, and the format based on Leonardo da Vinci’s “ideal page size.” The brand name and logo of a penguin did not materialize out of a vacuum, either. The Lanes selected it using more or less the following deductive reasoning: (1) We blatantly copied Albatross, so why stop now? (2) An albatross is a creature. (3) Therefore, our mascot must also be a creature. (Fun fact: Penguins were popular during that time.)

This biography has conflict, intrigue, an insider’s view of the publishing industry, and cameos by celebrated literary figures of the era. The Lanes were well acquainted with many authors, so be prepared for interesting anecdotes featuring the likes of Arthur Conan Doyle, Agatha Christie, George Bernard Shaw, and Oscar Wilde. Furthermore, the reader gets front-row seats to the Lady Chatterley’s Lover obscenity trial (“the most celebrated trial in publishing history”) and the “boardroom meetings” conducted in the Lanes’ bathroom (you read that correctly).

It’s not a hyperbole to describe Stuart Kells’s dedication to providing a detailed historical report of Penguin Books and the Lane brothers as extraordinary. This task was a product of Herculean determination and stamina, judging by the number of sources he consulted: Richard’s numerous diaries (the man was a compulsive oversharer), Allen’s astrological reports (he obsessively sought advice from psychics and astrologers), lengthy correspondence between the brothers, telegrams, dinner menus, reference letters, application forms, and so on. These sources are seamlessly woven into the narrative, creating an immersive reading experience.

This article was copy edited by Sylvia McCluskey.