If you want a comprehensive, in-depth guide that answers questions about 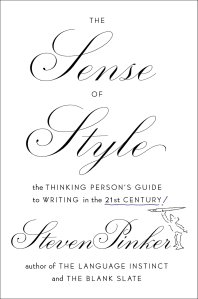 grammar, usage, and style, turn to Steven Pinker’s The Sense of Style, which was just released in September (2014).

There are different types of styles—plain, practical, classical, and postmodern—and they can overlap. Pinker is a proponent of classic prose, which steers clear of abstractions in favour of concrete examples. Why is this method so effective? Because, as Pinker explains, readers’ comprehension levels skyrocket when their sensory cortices are stimulated. “Fresh wording and concrete images force us to keep updating the virtual reality display in our minds.” That’s why writers should be cinematographers, using as many tools as needed to draw lucid and coherent—not to mention beautiful—pictures for their audience. Among these tools are metaphors, parallel syntax, phonesthetics (“the feeling of sound”), and zeugma (“the intentional juxtaposition of different senses of a word”).

If you are using classical style, you are engaging readers in a conversation, not attempting to impress them with your authority on a subject. “Classic writing, with its assumption of equality between writer and reader, makes the reader feel like a genius.”

Did I feel like my IQ increased while reading this book? Yes and no. Not when Pinker made it a point to emphasize that having a firm grasp of grammar can make someone a better writer. And definitely not when he referred to grammar as “the original sharing app,” presumably so my technology-infused Generation Y mind could wrap itself around the concept. On the whole, however, Pinker treats his readers as intelligent beings capable of following him into a vast linguistic wonderland, where it’s easy to get lost in passages such as:

In that excerpt from Alice’s Adventures in Wonderland, your brain is required to do a lot of back-and-forth checking and rechecking. “Every negation requires mental homework, and when a sentence contains many of them the reader can be overwhelmed,” Pinker says. He uses his background in cognitive science to eliminate confusion and to explain why certain passages are incoherent and may make your head spin. You are provided with a map of Wonderland so detailed, you will rejoice (unless you like running around in circles).

The sheer scope of this book is remarkable. Steven Pinker jumps through lots of hoops to lead you to be a better writer (or editor)—his acrobatic performance should be applauded. He compares good and bad writing, battles prescriptive grammar rules that are either erroneous or obsolete, and analyzes 100 issues in grammar, punctuation, and diction.

I urge you to read this book a few times and to keep it on hand as a reference. But even if you don’t like books about style or grammar, Pinker still provides some food for thought. If you ever wonder why some writers can write beautifully without reading style manuals and with no formal training in grammar, it is because they have subconsciously reverse engineered good prose. I’ve heard a few people say, “I don’t read; I write.” To this, I must quote Pinker once more, “Good writers are avid readers.” Read a lot. It is, like much of Pinker’s advice, only common sense.

This article was copy edited by Valerie Borden.