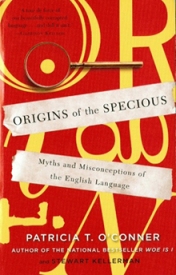 In Origins of the Specious: Myths and Misconceptions of the English Language, Patricia T. O’Conner and Stewart Kellerman take readers on an exciting tour of a mythological etymological landscape. Prepare to have your illusions shattered. “You may kick and scream…when you find that many of your most cherished beliefs about English are as phony as a three-dollar bill,” the authors warn before they rip apart the veil.

If you think the British language is “purer” than the American version, you’re mistaken. If you think SOS stands for Save Our Souls or Save Our Ship, you are not alone…just horribly incorrect. But surely beginning sentences with a conjunction is a modern phenomenon, right? Wrong. Axe another question. Before you tell me that I made a mistake in the previous sentence, I must tell you that axe is the original spelling and pronunciation of ask.

At the risk of fanning the flames, I’m sorry to inform you that ain’t used to be a legitimate contraction of am not and are not; toupée is a fake French word; and the grammarian who first suggested we use he as a universal pronoun to refer to both men and women was—gasp!—a woman.

If there is a common theme throughout this collage of corruption, it’s that language is a democratic process and everyone can vote as many times as they wish. “Wrong” usage of certain words has now become ubiquitous because people have misused these words too often. (It’s chaise longue, not chaise lounge.) Language is in a constant state of flux. “Perhaps the biggest myth of all is that English never changes.”

The detective work involved in creating this book is impressive. O’Conner and Kellerman play the roles of spies, assassins, and mediators in a literary battleground among traditionalists, neologists, and the general public. They blast myths at every turn, making this book an action-packed page-turner for word enthusiasts. This book is The Hunger Games of etymology. “As English reinvents itself, we’ll have winners and losers. May the best words win.” And may the words be ever in your favour!