A career as an editor is often a solo adventure, especially if you’re a freelancer. So we thought one way to better connect with fellow editors was to ask them the Five Ws: who, what, where, when, and why. Read on for some thought-provoking, enlightening tidbits from those of us who choose to work with words to earn our keep. 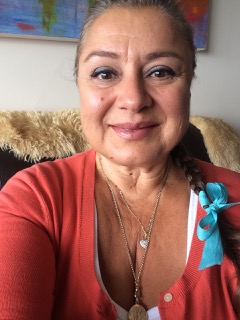 Please tell us a little about yourself, the kind of work you do (and where you live), and how long you’ve been an editor.

I’ve worked as a copy editor in Toronto for over 30 years, mainly for magazines: Toronto Life, Azure, and The Walrus, both in-house and freelance. I received a National Magazine Award as co-winner for best editorial package in The Walrus, a rare honour for a copy editor. I started out typing manuscripts on octuplicate carbon paper at Maclean’s, took a job at TV Guide as editorial secretary, got promoted to copy editor, and earned my master’s at UOTJ (University on the Job). Once I found my niche, I chose to specialize and hone my skills rather than climb up the editorial hierarchy. Except for internships, which don’t provide the same intensive hands-on training, those entry-level positions no longer exist. That long arc gave me a foundation in print production and took me from the introduction of desktop publishing all the way up to electronic editing today. Since 2001, I’ve been freelancing full time for a diverse range of clients, from marketing departments and custom content firms to government agencies, non-profits, and academic presses. I’m “content agnostic,” which means I can edit pretty much anything for publication.

Margaret Atwood, because I admire her prolific body of work and her unmistakable voice. As well, she acknowledges and collaborates closely with her long-time copy editor, Heather Sangster, which shows her respect for the craft and its value to the writer. I had the pleasure of copy editing her first e-book, I Dream of Zenia with the Bright Red Teeth, for The Walrus.

Punctuation mark: the ampersand, a.k.a. the 27th letter of the alphabet. I appreciate its typographic flair. Favourite word: serendipity. Both suggest possibility…something beyond.

Turks and Caicos. Between 2009 and 2012, I rented a place and spent 11 months living and working there, sitting outside at a beachside restaurant with my laptop and the Canadian Oxford Dictionary. People thought I was a travel writer (my dream job). Even on deadline, I’d take breaks to jump in the ocean and cool off between edits. That plan did go south for a moment when Hurricane Irene struck—no power or Wi-Fi for three days. 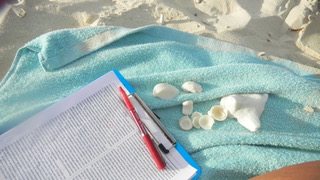 Checking final proofs on the beach in Turks and Caicos. Photo courtesy of interviewee.

I’ve never questioned it in terms of fit. However, many editors find themselves precariously employed. For me, this goes back to the early ’80s, when I got restructured out of my job as a feature copy editor; the first of five layoffs from various magazines over the years. I’d like to slow down or be choosier about projects—and retire someday—but the market doesn’t afford most freelance editors those options.

I’ve always been an avid reader with an eye for errors. I wanted to be a teacher, and in Grade 4, I used to compose tests for my friends to take. Decades later, I realized that the part that appealed to me wasn’t the teaching; it was the marking and correcting. I did well in English and art, and magazines immersed me in wordsmithery, typography, and visual arts. Plus, I got to contribute as part of a larger creative team and do some writing here and there. I’ve likened editing to working as a line cook in the brigade at a fine restaurant: intense and exacting but satisfying. Copy editors often work in isolation, rarely interacting with writers, and the best compliments I’ve received were that I made their work sound like them, only better.

Do no harm. Take no prisoners.

Arija Berzitis is the secretary of Editors Toronto.

This article was copy edited by Ann Kennedy.

By Editors Toronto in career, editing, editors, Editors for Life, freelancing on February 5, 2020.
← Recap of A Discussion on the Business of Editing Generating Business Online: Build Your Skills in Website Creation and Discoverability →