I’m a digital nomad. For years I’ve told anyone who asked that I was a writer and editor (even though editing pays most of my bills). But lately, the way I work has been more interesting than the work I actually do.

But I’m still getting used to saying “I’m a digital nomad” (and sometimes, I confess, I often use air quotes when I do say it). I know what “digital nomad” conjures up: visions of twenty-somethings with no job prospects and an unnatural attachment to their smartphones.

Air quotes aside, such visions are really just the surface of this cultural phenomenon. (And thanks to Insta-influencers and click-bait web content, that surface seems both beautiful and vacuous). But there are plenty of Gen Xers, Xennials, and even grown-up millennials doing marvellous and fascinating things on the road.

I’d like to think I’m one of the grown-up digital nomads. For the last several years, I’ve been seeking out new temporary homes for me and my editorial services business, sometimes spending months in one place and sometimes changing it up every few weeks.

In 2012, I was a burned-out freelancer looking for adventure. After months of preparation, I headed out on a trip around the world, with stops in Thailand, China, Cambodia, India, the UAE, Spain, France, Italy, and the UK before coming home nine months later. Everyone thought that might be it, adventure had.

But I wasn’t ready to settle back into the same old same old. And I’ve been on the move ever since, spending some months each year in Toronto and the rest of my time in Europe, South and Central America, Thailand, and Vietnam. In 2018, I’m returning to Thailand, and then on to Southern Africa.

This wanderlust may have begun as therapy for my tertiary life crisis. But over the last five years of living and working abroad and living and working in Toronto, I’ve realized that there is a strong economic argument for tackling our gig economy as a nomad. After several months living at home in TO again, my pocketbook is itching to get the heck out of Dodge! (Also, winter is coming, and I hate wearing socks and shoes.)

Life in this city and its surrounds is hard on the budget. The housing market may have put on the brakes this past summer,  but housing costs in our fair GTA are still sky high. Rent continues to climb and rising interest rates combined with taxes and utilities put pressure on the carrying costs of houses and condos.

And food? Stats Can reports that in 2015, the average household in Ontario spent about $700 per month on groceries alone.

We work-from-home freelancers must get out of the house once in a while, even if it’s just to meet colleagues for coffee, drinks, or a meal. Most of us say, “Why not? It’s good for me, it’s good for business, and I can write it off.” As fun as writing off “work lunches” may be, at most watering holes in Toronto, you can easily consume twice your effective hourly rate in the space of an hour or two.

The internet warns readers that life in Toronto costs about $3000 a month, at a minimum—many live on less, but according to Vice, you need at least $5000 to really “live.”  And by living, they mean saving a little, buying clothes, getting your hair cut, buying books, taking a vacation, and eating out more than once a week or at restaurants that charge more than $15 for an entrée.

A few years ago, living on the beach in Thailand on just $1200 per month helped me turbo charge my savings to finally get enough for a down payment on a condo in downtown Toronto. And living and working as a digital nomad has helped free up my time for both travel adventures and working on my own projects. This past year, I spent a month travelling in India not earning a dime, and I put a month’s worth of billable hours toward doing my own thing—lifestyle choices made possible by $5 feasts in Thailand and $3 wine-and-tapas deals in Spain.

While the cliché of living cheaply in Southeast Asia and economically sluggish European countries tends to dominate the digital nomad discourse, it is by no means the only option. Across the globe, the digital nomad life can be equal to or less than the cost of life in Toronto, and more expensive destinations can easily be subsidized by economizing in other locales.

Being a digital nomad is a minimalist lifestyle, given that all your possessions must fit in your suitcase. It allows you to cut through the noise of the everyday to see what really matters to you, and the variety and adventure it affords can energize your work and creative life.

And the fact is, if you’re a freelance editor, you’re already a digital nomad. You’re already working remotely from your clients, working from cafes and co-working spaces, and perhaps even hotel rooms. You might even have clients in wildly different times zones. So, what difference does it make if you’re working from your home office, or from a café in Thailand, a co-living/co-working space in Europe, or a beachfront guesthouse in Central America?

Well, let’s be honest—there is a difference. Pulling up stakes and hitting the road isn’t easy. But it is doable—even for people with partners and children. Don’t dismiss the notion out of hand. 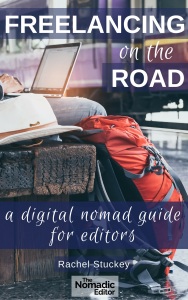 I fell into a nomad lifestyle by accident, and I’ve learned a lot from mistakes and successes along the way, mostly making it up as I go. Now I’ve written Freelancing on the Road: A Digital Nomad Guide for Editors to share what I’ve learned.

My book is different than the endless stream of digital nomad guides and resources out there in cyberspace—it’s written for editors by an editor.  And unlike other digital nomad gurus (yes, that’s a thing, and there is a multitude of us), I’m not selling shovels in a gold rush—this book isn’t a how-to checklist for aspiring nomads. Rather, Freelancing on the Road explores what it takes to become a digital nomad editor and what the digital nomad life is like for freelance editors. It’s a guide to help you decide if freelancing on the road is right for you, and perhaps nudge you on your way.

Rachel Stuckey is a freelance writer and editor from Toronto. She’s been a digital nomad since 2012, running her freelance editorial business from her home in Toronto and from cafés, hotel rooms, beach bungalows, hostel beanbags, and coworking spaces around the world. After a decade of working almost exclusively in educational publishing, Rachel now works on a wide range of projects including textbooks, academic journals, websites, learning resources, travel writing, and children’s books. You can find Rachel online as the Nomadic Editor and at www.rachelstuckey.com.

This article was copy edited by Carol Harrison and Karen Kemlo.

2 thoughts on “Being a digital nomad: Or how to edit from the beach”