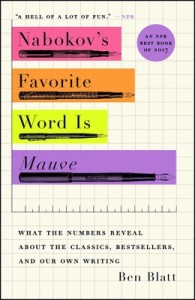 Can you tell whether a book was written by a man or a woman, based only on the words the author used? Is the road to hell (or at least to bad writing) paved with adverbs, as Stephen King once claimed? Do American authors write “louder” than British authors? If you’re intrigued by these questions, Nabokov’s Favorite Word Is Mauve will satisfy your curiosity.

Author Ben Blatt uses data journalism to apply statistical analysis to a wide variety of topics. In this book, literary works and bestselling fiction are subjected to his big-data approach, often with surprising results. While this isn’t meant to be an instructional book by any stretch of the imagination, writers and editors might find some of the takeaways applicable to their own work. His statistics on sentence length, repetition, gender balance, and other topics may give readers some additional things to think about when they write or evaluate a novel. But generally, Nabokov’s Favorite Word Is Mauve is simply an interesting and unusual way to look at writing.

Blatt concentrates on works of fiction from the 20th and 21st centuries that are the most highly regarded (according to a number of lists and ratings), plus those that sold the most copies. He does delve back into the 19th century as well, reaching as far into the literary past as Jane Austen’s novels. Blatt uses 1,500 books as his main dataset. He compares these professional works with works of online fanfiction. The fanfiction represents non-professional writing and is used for comparison with the accomplished works in his main dataset.

Among the topics Blatt explores are some long-standing pieces of advice that authors often receive, and he analyzes whether they have been applied in the novels he examines. For example, he looks at the following advice for authors: avoid using exclamation points, minimize adverbs ending in ly, get rid of clichés, and don’t open a book with a description of the weather (as in, “It was a dark and stormy night…”). He also examines whether authors follow the advice that they give other writers.

He breaks down the content of co-written books to see if the writing style betrays which author did most of the writing. He also looks at authors who have attempted to hide some of their work behind a pen name to determine whether one can, with the use of analytics, discover who wrote the books. In other words, do authors leave their “fingerprints” all over their work even when they’re trying to hide their identity?

As the title suggests, the book uncovers the “favourite” words of many writers. These are words that an author uses in their work much more often than other writers. Of course, some authors’ favourite words are skewed by their limited literary output; for example, J. R. R. Tolkien frequently uses elves, goblins, and wizards, but this comes from analyzing only a few works: The Hobbit and the Lord of the Rings trilogy. For other authors, the list contains some surprises. James Bond author Ian Fleming, for example, made unusually frequent use of the words lavatory, trouser, and spangled.

Nabokov’s Favorite Word Is Mauve is a fun book for those who like to ponder what separates great writers from the rest. Blatt takes readers on a fascinating journey through literature at a microscopic level that most of us would otherwise be unaware of. While data analytics can’t replace the careful attention of a good editor, it can shine a light on common issues that we may not otherwise notice and provide evidence to either back up what we instinctively believe to be true or prove our instincts wrong. And if you’re still wondering about those questions at the beginning of this review, the answers, according to Ben Blatt, are yes, sort of, and yes.

Michelle Waitzman is a freelance non-fiction writer, editor, and proofreader in Toronto. Before she started editing, Michelle survived careers in TV production and corporate communications. Between these, she ran away to live in New Zealand for seven years.

This article was copy edited by Grant Brooks.

By Editors Toronto in book review, fun, language, writers, writing on April 11, 2019.
← A conversation with Esi Edugyan and her editors: Another successful collaboration between Editors Toronto, Canadian Authors–Toronto, and University of Toronto How to Find Freelance Editing Work →