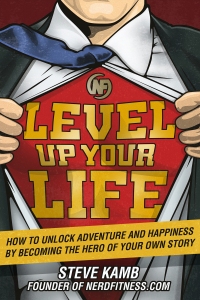 Not all editors are writers, but all editors are readers. The majority of us fell in love with stories when we were little, making friends with the characters on the page. Some of those memorable characters were inside TV shows, movies, and video games, too. Steve Kamb, the author of Level Up Your Life, reminds us of our greatest childhood heroes and uses that nostalgia to make goal-setting fun again.

The concept for Level Up Your Life began for Kamb when he found himself with everything a person needs—family, friends, a good job—but he still felt unfulfilled. After establishing a website to help gamers like himself get fit (nerdfitness.com), Kamb realized that wellness is about so much more than physical fitness. He writes, “I wanted to turn my life into a game…I could become adventurous Steve Kamb, actively planning crazy experiences that would take me out of my comfortable hobbit-hole and away to far-off lands, into life-changing moments of growth and adventure.” He realized that by gamifying his life, he could start accomplishing all of his personal and professional goals. And that’s exactly what he did.

Now, Kamb is teaching others how to do the same thing. With Level Up Your Life, Kamb shows readers how to use this same system to achieve their own goals.

Level Up Your Life isn’t a book about editing, but it is a book for editors. It’s for anyone who wants to reach his or her personal and professional best in life. What are your editing goals? To gain five new clients this year? To expand into a new field of editing? To upgrade your skills and take a new course? Whatever your goal, Level Up Your Life will show how to make goal-setting fun through gamification.

Throughout the book, Kamb invites you to “join the Rebellion” and complete quests that will help you take the first baby steps towards levelling up. Don’t believe someone like you could actually attain such lofty goals as traveling the world, publishing a book, or living a day as James Bond? Real-life examples (called “Spotlights”) throughout the book show that people just like you have accomplished all that and more.

Kamb’s strength as an author is also his greatest weakness. Reading Level Up Your Life is like sitting down for a one-on-one conversation with Kamb, who anticipates your questions, dispels your fears and shuts down your counterarguments as he goes. In his effort to be conversational, however, Kamb tends to ramble. For editors, this issue is particularly irksome, as you’ll find yourself cutting paragraphs from your reading the way you would have from the manuscript if you had been Kamb’s editor.

The journey is also supported by free resources at nerdfitness.com. The website offers wellness-related courses, sample quests for those who need a little inspiration, and more. The website still caters mainly to Kamb’s original audience (nerds who want to get fit), but it allows you to create your own character and customize goals to meet your unique needs.

It comes down to one thing, as Kamb points out early on: daily improvement. Kamb shows you how to use quests to slowly work your way up to “Level 50 Achievement Status” without feeling overwhelmed or overworked. Sound too easy? It’s not. It takes dedication and work. Freelancers who are used to having to manage their own time and organize themselves will likely excel with the program, but the less self-directed will realize that Level Up Your Life does not replace the need for a face-to-face life coach.

Jessica Trudel has been a freelance writer and editor since 2006 and is an outspoken advocate for the arts in Northern Ontario. A mother of four girls, she is also on the board of directors of her local writers’ guild. She recently began hosting LitBulbs on YouTube.

This article was copy edited by Tom Nicholls.