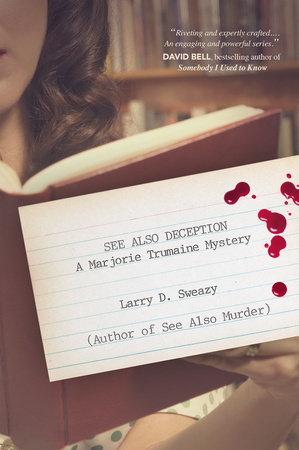 Full disclosure: I have never been into murder mysteries. No early Nancy Drews, no later Agatha Christies—frankly, I just felt like I would never be able to figure the mystery out and would feel kinda dumb, so I never embraced the genre. The only reason I was interested in the Marjorie Trumaine books by Larry D. Sweazy was that I’d heard they were written by and about an indexer.

I was a little skeptical about how the second book of the mystery series, See Also Deception, could pick up with a new murder only months after those of the first, but this fell by the wayside once I cracked open the book. In a nutshell, our newbie-sleuth heroine cannot accept that her librarian friend has committed suicide, and her indexer-character tenacity leads her to work the details of the case that are missed by the police. Fortunately, foreshadowing is well handled and carries the reader’s interest rather than handing over the solution to the murder on a silver platter. This is perhaps due to Sweazy’s writing habit of working organically and without complete pre-outlining, which lets the story unfold for himself as much as for his audience.

In his acknowledgments, the author says, “Indexing, like writing, is a job best done in isolation.” In See Also Deception, he has again succeeded in creating an atmosphere that highlights the protagonist’s isolation, both physical and psychological, despite the constant presence of her invalid husband and her community of Dickinson, North Dakota. The bleak feeling also works for the character and plot development that he tantalizingly creates for the reader.

Of course, the fun part for those of us editors who are also indexers is the author’s use of the indexing career and practices as a plot device. I could relate to his reference to Marjorie’s appreciation of the order on her desk and the issues involved in creating an effective index. But fun aside, his inclusion of partial indexes as her way of making sense of the case is absolutely essential to the story: a thriller featuring a doctor could hardly work if medicine wasn’t part of the plot and character development. I think it must also do the indexing industry good to have this kind of work introduced to and described for the general public, since we indexers are all too used to the “What’s that?” and “They still do that?” questions about our work.

On the more serious side, See Also Deception also examines the issue of assisted dying, which is very topical in Canada at the moment. Sweazy handles this difficult topic deftly, but in the interest of not providing any spoilers, that’s all I’ll say.

Finally, my husband (of an arts and advertising background) saw the book and said, “That’s a great cover!” Cover graphic design is not just a consideration for marketability; the visual appeal of this book (and the first in the series) did keep me returning to it—well, I fib a bit: it affected me only twice, since I finished the novel in two days. But it’s a nice little bonus.

If I had to describe this book in two words, it would be “good fun.” Definitely put it on your beach reading list or, if you want to really immerse yourself in the atmosphere, save it till those long, dark winter nights.

Vanessa Wells is an editor, proofreader, and indexer in Toronto. You can read her write-up of Larry’s keynote speech at the ASI/ISC 2016 Indexing Conference in the upcoming issue of The Bulletin newsletter and of her interview with him when they met on the eve of the conference in Chicago on her blog, Beautiful Feet.

This article was copy edited by Ana Trask.